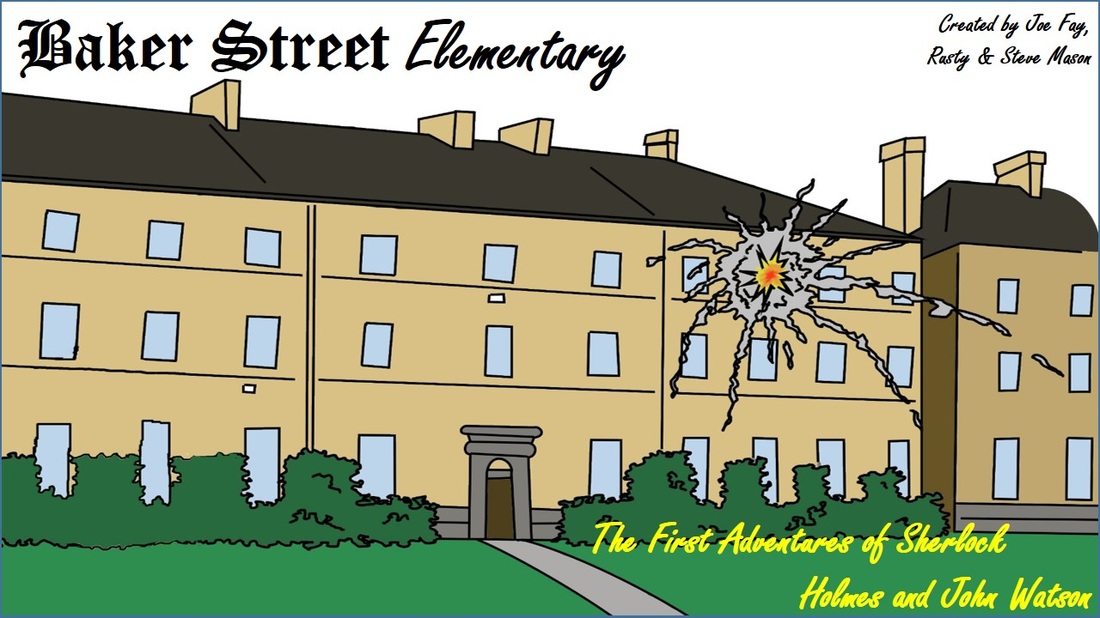 ​Introduction to Baker Street Elementary
By Don Hobbs, BSI
In recent years, one could build a virtual mountain out of the amount of material devoted to the world’s first consulting detective. Every type of medium imaginable has seen a great proliferation - movies, video games, television series, comic books, pastiches, and even Canonical Pop-Up books number themselves among other reissued variations of the Canon. As one can deduce, not everything available is a must-have piece of Sherlockiana, not even close. On the other hand, a few items are as fresh as a newly fallen snow, and still fewer of those actually make one’s pride swell simply for owning them.
Baker Street Elementary is one of those rare treats, taking all of the familiar Sherlockian characters and presenting then in a completely original manner. This marvelous creation, the brainchild of Joe Fay (creator & writer), Steve Mason (writer & editor), and Rusty Mason (artist), features Holmes and Watson during their formative years at that long-ago elementary school that might have been…somewhere on Baker Street. The magic this trio produces is evident in every panel of every strip of Baker Street Elementary. There is nothing close to South Park envy here, in fact many of the South Park residents most likely wish they could attend Baker Street Elementary.
The exploits of Holmes and Watson are here for the reader’s enjoyment, demanding that one read the strips with one eye towards the Canon and one tongue planted firmly in cheek. Peppered with other well-known characters like Lestrade, Mycroft, and Stamford, (and with plans to introduce the female characters from the Canon who attend a sister school), the panels are funny, but also show a deep, intimate, working knowledge of, and a healthy respect for, the Canon of Sherlock Holmes stories. The pawky humor is wry and thought-provoking. Those familiar with the newsletter of Dallas’ Sherlock Holmes society, The Crew of the Barque Lone Star, will know that Baker Street Elementary adorns the back page of each issue. The strip has also been regularly syndicated, or guest-starred, in other Sherlockian society newsletters, such as the Sound of the Baskervilles.  Irregular appearances of new strips entreat the society members with randomly-released episodes between the monthly newsletters. Basically, whenever Joe, Steve, and Rusty can fit this labor of love into their already-hectic lives.
See for yourself what those lucky Dallas Sherlockians have known for a long time: Dallas has more to offer than football, oil, and cattle. It has a first rate Sherlockian comic strip, with a growing fan base.
Enjoy! Flower Mound, Texas, Dec. 2015